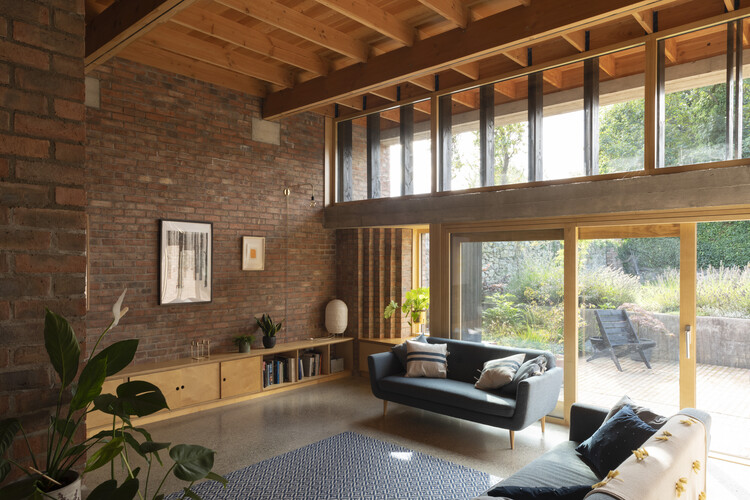 Text description provided by the architects. A new build family house and an existing coach house are located within the garden, to the rear, of a listed house in Blackrock, Co. Dublin, Ireland. The new build house is located between an existing 19th-century coach house building and a garden to the rear of a listed late Georgian house. The site prior to the building of the house was left idle for many years.

The architect’s approach to the site’s layout is defined by the idea of ​​creating a series of garden spaces to the front, middle, and rear. These planted outdoor gardens and courtyards are positioned in such a way that creates a composition of different spaces, allowing light in and views out from each room within the house. The house adopts three volumes, each of differing heights, which are expressed internally within the section through varying ceiling heights and internal volumes. Both the ground and first floors have changes in their floor levels creating a spatial interest in the house internally.

The existing coach house, a historic structure built circa the 1830s, was maintained as a separate entity acknowledging its existence as a standalone building. An external courtyard, which takes advantage of the irregular geometry of the site constraints, was created between the existing coach house and the new house. This exterior courtyard forms both an entrance space allowing light into both buildings and an interesting spatial sequence before one arrives at the front door to the main house.

The house makes the most of its orientation, windows and glazed doors are carefully positioned to ensure that the interior spaces reflect the changing light and seasons. Light entering the living room, to the rear of the house, in particular, casts dramatic shadows across the internal brick walls as it passes through the rhythmical vertical black stained timber fins along the clerestory glazing. The house, both externally and internally, uses a restricted material palette and different textures to create a rich environment within the home. The choice of brick was driven by the existing context of the site and its surroundings.

A buff red brick was chosen as it harmonized with the existing brick present in the coach house and complimented the existing coursed random rubble granite walls which enclose the site on all sides. Exposed Douglas fir structural timbers are used in the ceiling of the main living room within the house. The external canopy within the courtyard and the fins to the rear clerestory glazing are stained black Douglas fir timber.

Load-bearing concrete lintels and beams are all in-situ, poured in conjunction with the U-shaped rainwater hoppers which are also cast concrete elements. The project is an exploration of light, materials, and space-making. The chosen material palette is robust and will age naturally with time. Spaces both externally and internally are given equal consideration.