Suizenji Garden: One of the finest of Japan’s feudal samurai strolling gardens

During Japan’s feudal age, the favorite duck hunting ground for the successive lords of Kumamoto Castle and their warrior entourage was a spring-fed pond about one ri (four kilometers) southeast of the castle.

In the 1630s, Tadatoshi Hosokawa (1586-1641), the latest of the daimyo feudal lords of the castle, one of the finest on the island of Kyushu, decided he wanted more leisure pleasure from this site. He sponsored the establishment of a Buddhist temple to the north of the pond and had a teahouse, Kokindenju no Mabuilt on the pond’s western shore.

Over the generations, Tadatoshi and his heirs continued to develop the area around the pond, molding it into an elegant strolling garden (kaiyushiki teien) in the finest samurai tradition.

Today that garden is known as Suizenji Jojuen, taking its name from that Buddhist temple of centuries ago. (The temple no longer exists.) The garden is a tranquil space widely regarded as one of the finest samurai strolling gardens of Japan, complete with various seasonal blossoms. It is also the site of various traditional cultural events and activities throughout the year.

As the garden was developed, the landscape around the pond was sculpted into miniature versions of various landmarks along the Tokaido, the famous roadway connecting Kyoto, the imperial capital, to Edo (modern-day Tokyo), the shogunal seat. The most famous Tokaido landmark is Mt Fuji, Japan’s highest mountain. Similarly, a miniature Mt Fuji near the pond’s eastern shore dominates Suizenji, visible immediately upon entry to the garden. 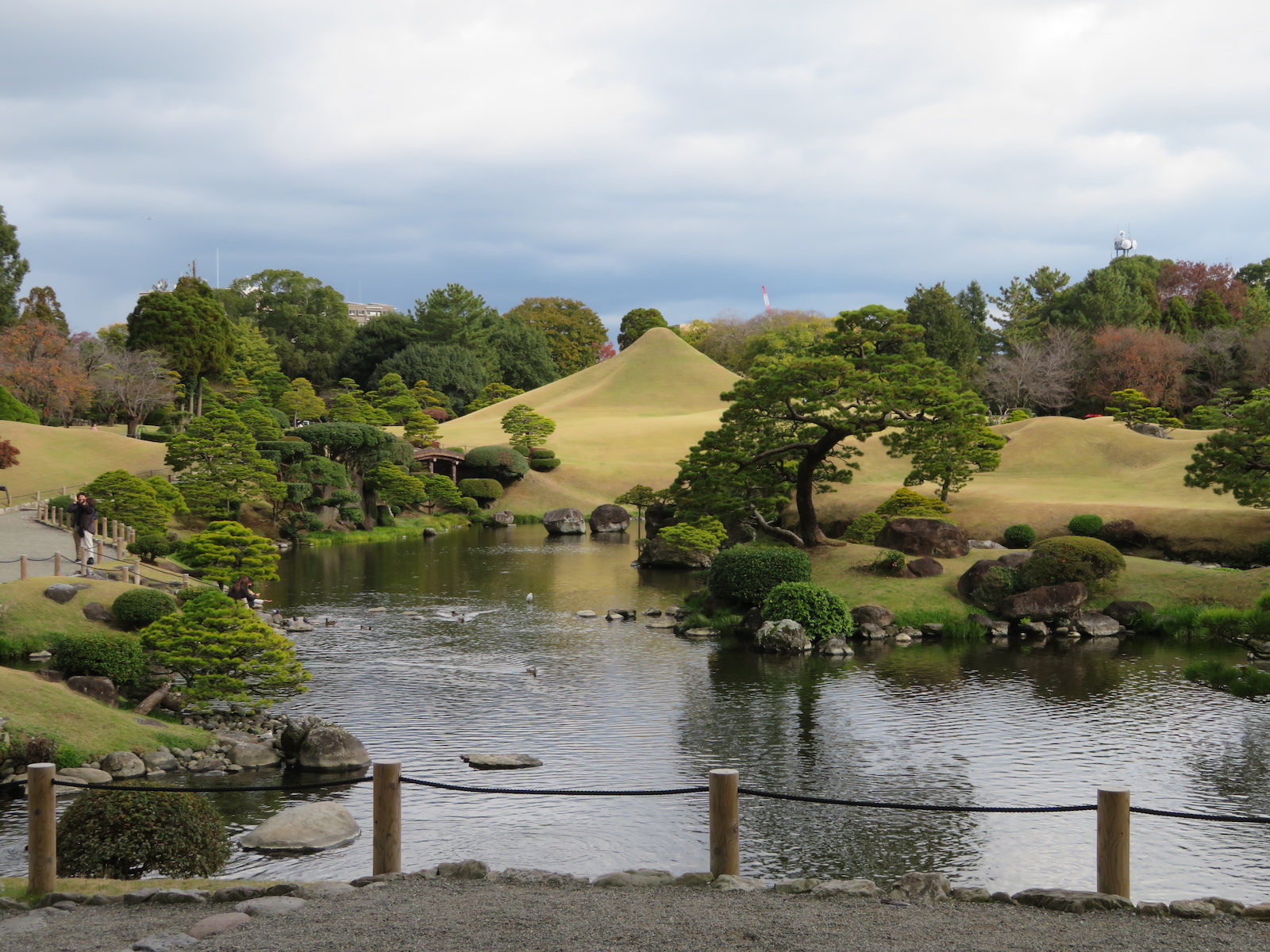 Many visitors to the garden proceed clockwise around the pond, first crossing a nineteenth-century stone bridge at a narrow section of the pond. It is popular to buy packets of fish food to feed the large, colorful koi that can be seen in the pond from both sides of the bridge.

Just beyond the stone bridge stands Izumi Shrine, a large Shinto shrine added to the garden in 1878, during Japan’s period of rapid modernization. In a sense, the shrine replaced Suizenji temple. The site for the shrine was selected due to a spring in that location that had been recognized by the second Hosokawa daimyo, Tadaoki (1563-1646), father of Tadatoshi, as emitting the “sacred water of longevity”. The Hosokawa sponsorship of the shrine is also revealed by the presence of the Hosokawa family crest, eight circles surrounding a larger circle, as a decorative feature of the main shrine building. 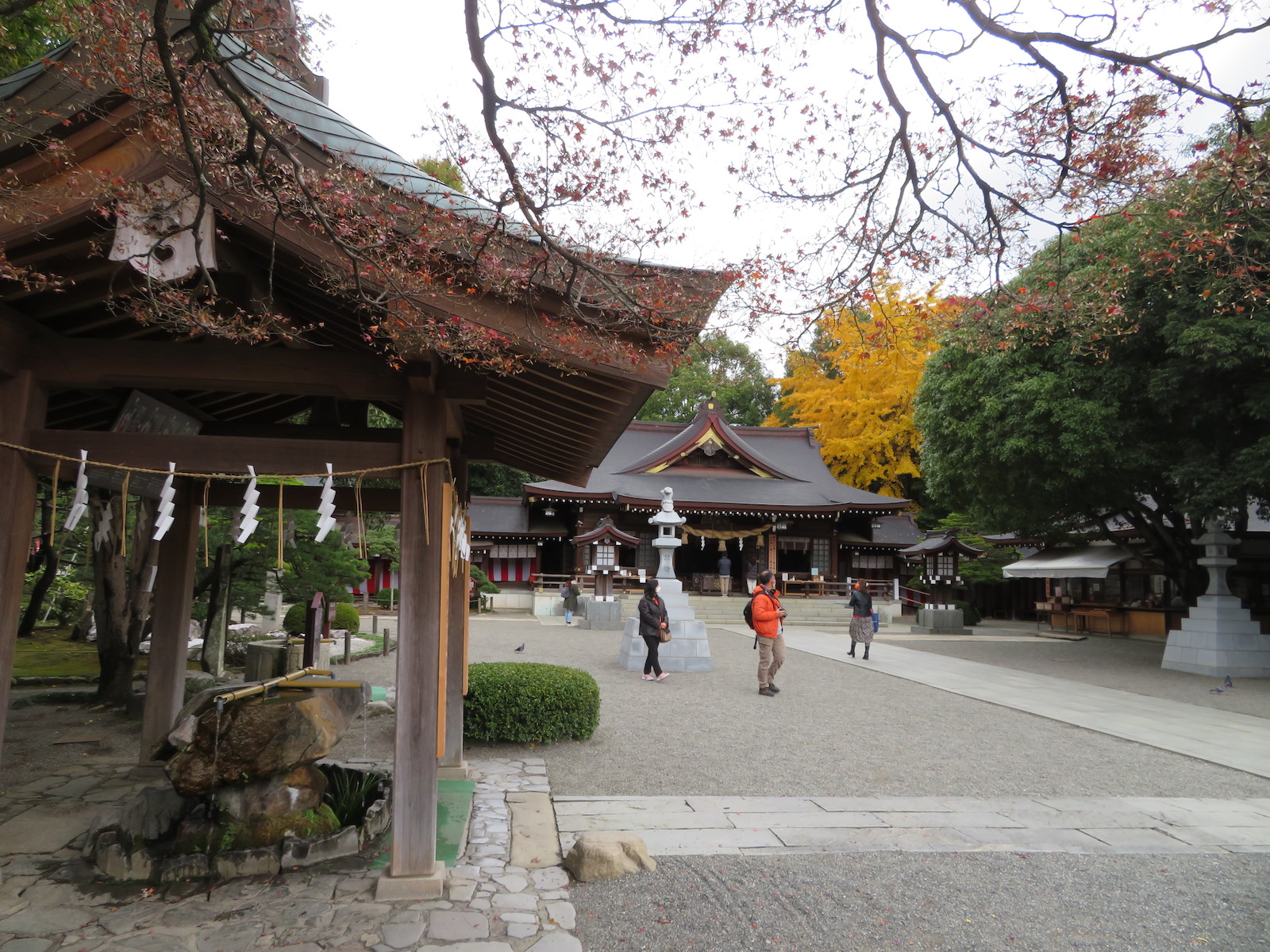 There is also an Inari (god of harvest) shrine, with its tunnel of red shrine gates, founded in 1809 as a branch of Kyoto’s famous Fushimi Inari shrine. The shrine is flanked by plum groves, which bloom in the dead of winter.

In addition to miniature landmarks of the Tokaido, the garden sports a number of other monuments. A haiku poem written by Natsume Soseki, widely regarded as one of Japan’s foremost modern writers, is etched into a tall stone near Izumi Shrine. Soseki lived and taught in Kumamoto from 1896 to 1900.

Further into the garden, a signboard explains that a bronze equestrian statue of Nagaoka Moriharu (1881-1904), a son of the last Hosokawa feudal lord and the first member of Japan’s nobility to die in the Russo-Japanese War, once stood in that spot but was melted down for war materiel in 1943. Not far away are two bronze statues of other Hosokawa lords: Tadatoshi, the original creator of Suizenji, and his grandfather, Fujitaka (1534-1610), both dressed in Heian Period (794- 1185) garb. 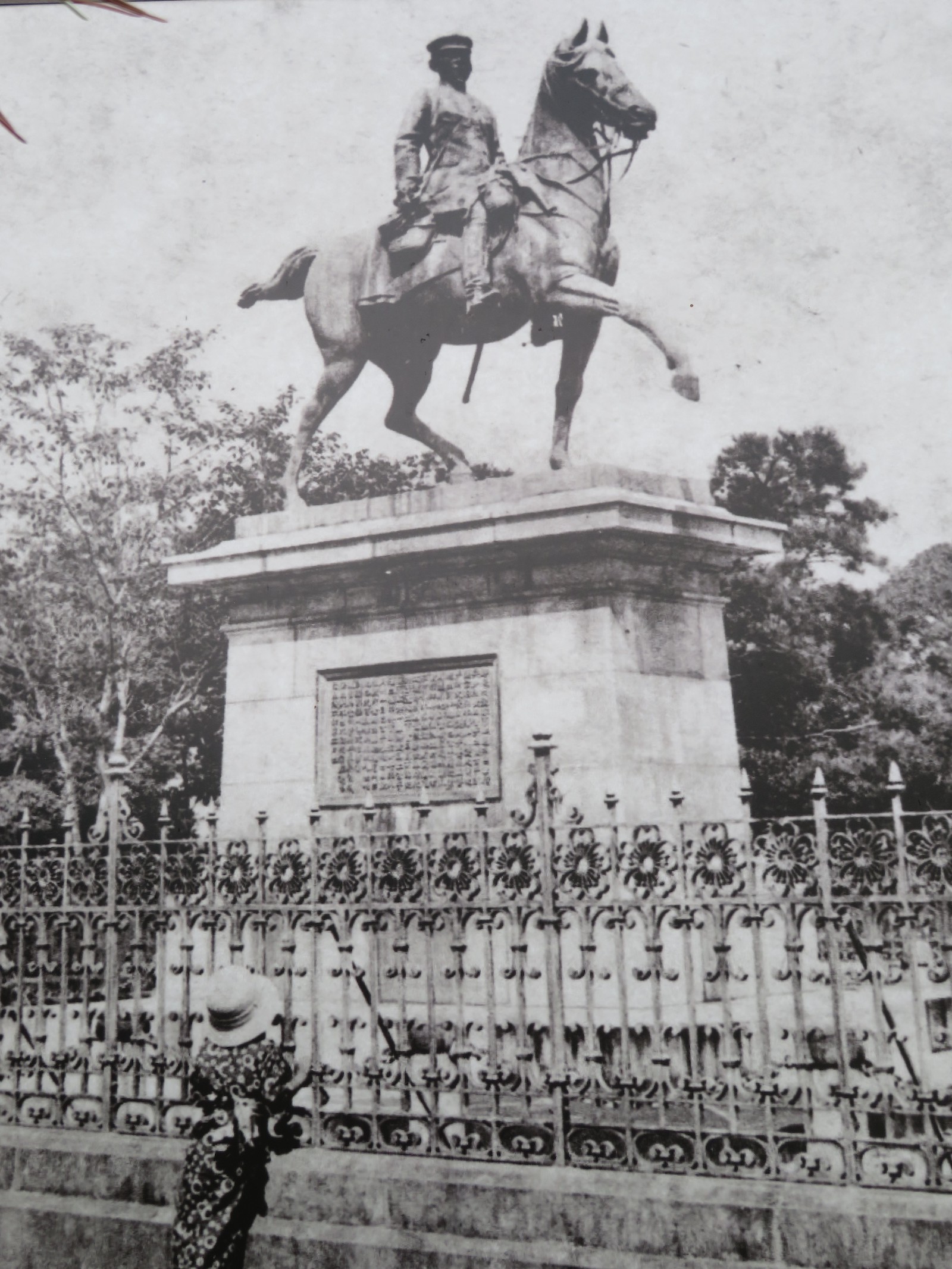 The section of the garden farthest from the entrance could be said to be its busiest corner. There is a track for horseback archery, which is performed here in April and October every year in conjunction with a festival of Izumi Shrine. There is also an evergreen nagi tree said to be more than 300 years old famous as a “matchmaking” tree. Nearby is a laneway lined with five of the six traditional Higo flowers (Higo is the feudal name for modern-day Kumamoto): the Higo camellia, sasanqua, peony, chrysanthemum, and iris.

A noh stage stands to the south of the pond, fronted by a lawn for audiences to watch torchlight noh in the summer. In spring the area surrounding the noh stage turns a soft pink with cherry blossoms. The noh stage was another 1870s addition to the garden, although the original was destroyed by fire in 1965 and has since been replaced with a stage of similar vintage moved in from the city of Yatsushiro to the south of Kumamoto. 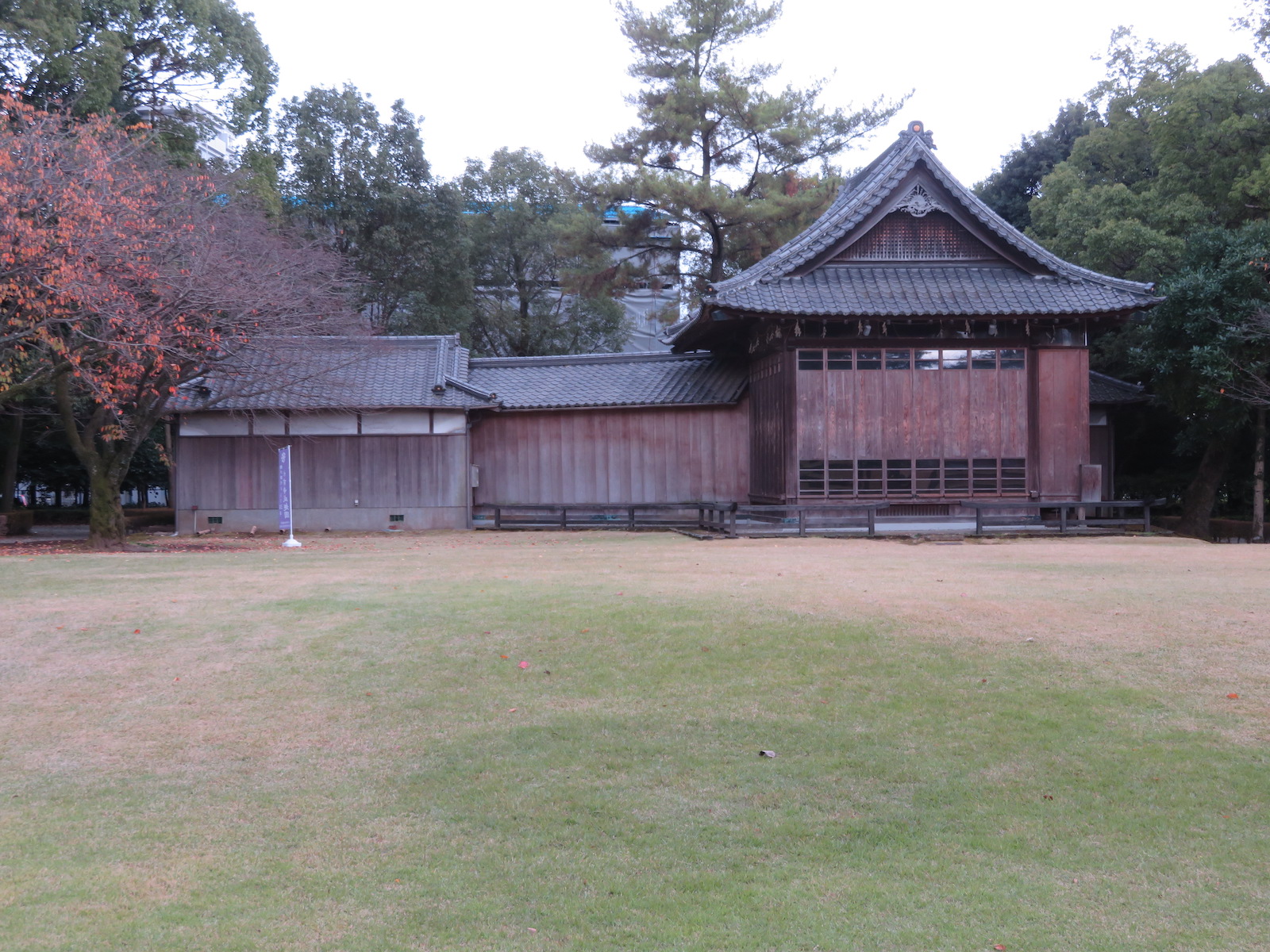 In a clockwise perambulation of the garden, the last garden highlight is Kokindenju no Ma, that thatched teahouse with which Tadatoshi started the garden all those centuries ago. Here visitors can enjoy refreshments (coffee or green tea and a locally-made sweet) while enjoying some of the best views of the garden and reflecting on the various garden delights just experienced. 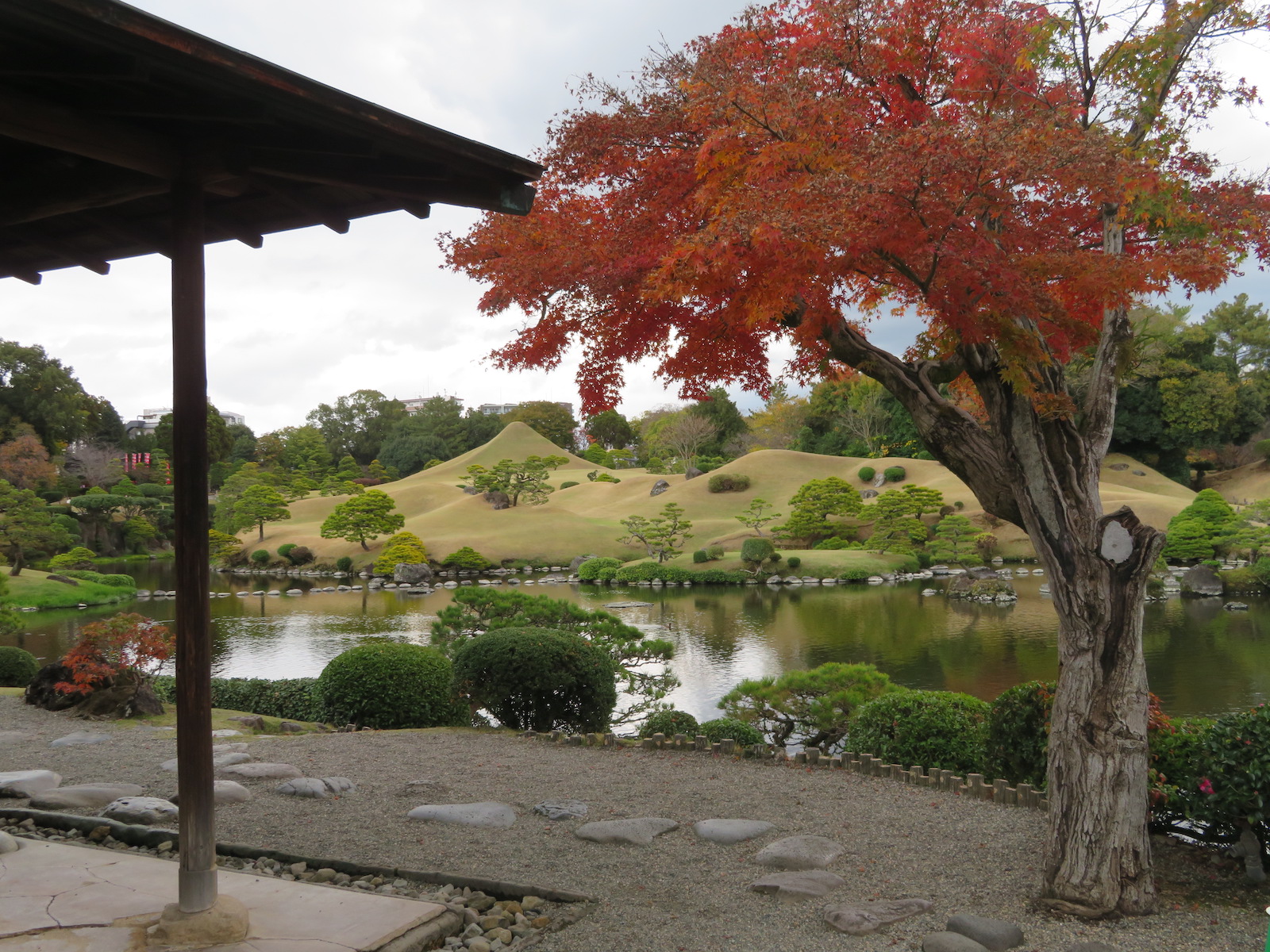 It is easy to understand why Suizenji Jojuen is one of the most popular destinations for visitors to Kumamoto, one not to be missed.

Getting there: Suizenji Jojuen is about a four minute walk from Suizenji Koen tram stop; there are also plentiful paid parking lots for visitors in private vehicles.