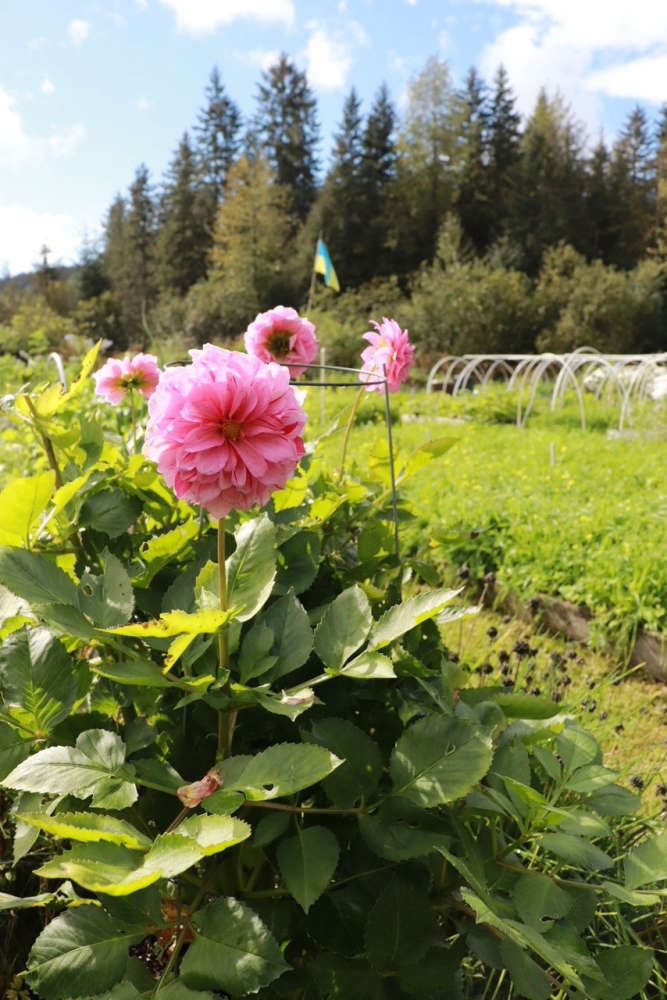 A view of the Juneau Community Garden’s plots. (Photo courtesy of Jasz Garrett/KINY)

Juneau, Alaska (KINY) – Saturday from 11 am to 1:30 pm was the Community Garden’s first Harvest Fair since the pandemic; it includes live music, prizes, a farmer’s market, and a garden tour.

The Juneau Community Garden is located out by Skater’s Cabin, just past the Juneau Gun Range.

The board consists of around 8 people, and there is a long waitlist to join, Sharon Fleming said.

“It’s a 10 x 20 plot, and some people have more than one plot. Anyone can apply on the website or email the community garden email to apply to be on the waitlist. We’ve had a waitlist going for a couple of years, I think.”

To apply for a garden plot, go to www.juneaucommunitygarden.org.

Cynthia Krehbiel is the event coordinator on the Juneau Community Garden Board.

Sharon Fleming talked about the fun things going on at the Harvest Fair put on with Krehbiel’s help.

“2019 was the last time the garden had the Harvest Fair because of the pandemic. We have an event coordinator, Cynthia, and she’s new this year to that position. And she did and amazing job. And so she gets like the food service, the children’s activities, but overall like she’s making sure that she’s checking in with me and Bob. Then we have Odette who is running the exhibit. We have musicians, we have s’more roasting. We have various things going on. We have the farmer’s market and Bob Trousil and his family run that and facilitate that. They do an amazing job.”

It’s the 28th year the Juneau Community Garden is celebrating gardening and harvesting.

Krehbiel noted that this Harvest Fair is the most amount of attendance she has seen.

Bob Trousil talked about his family’s passion for gardening.

“It was missed. It’s missed by especially the gardeners just to be able to contribute in produce or just show off their plots. We’ve been doing the farmer’s market for 8 or 9 years. We’ve been doing it as a family since the kids could do it pretty much. As time goes on they find their specialty. One girl will be great at radishes which isn’t really hard to do, but it’s fun. One girl is really into turnips and she likes to grow turnips. That’s fun! So it keeps something in the family that we can do together.”

Trousil also talked about what kind of produce his Farmer’s Market includes.

“The big seller and producer is carrots. The garden produces an extraordinary amount of carrots. We sold just a portion of what the garden produces for charity and yeah, and for the harvest festival. Lettuce, garlic, kale, occasionally rhubarb, chard, and potatoes. Sometimes some preserves, some people made preserves, and this year we had someone come forward with preserves. So that was pretty nice. But every year is different. Some years were really strong on garlic like this year; other years we never had it.”

Below: Trousil’s farmer market display of garlic and marigold flowers. 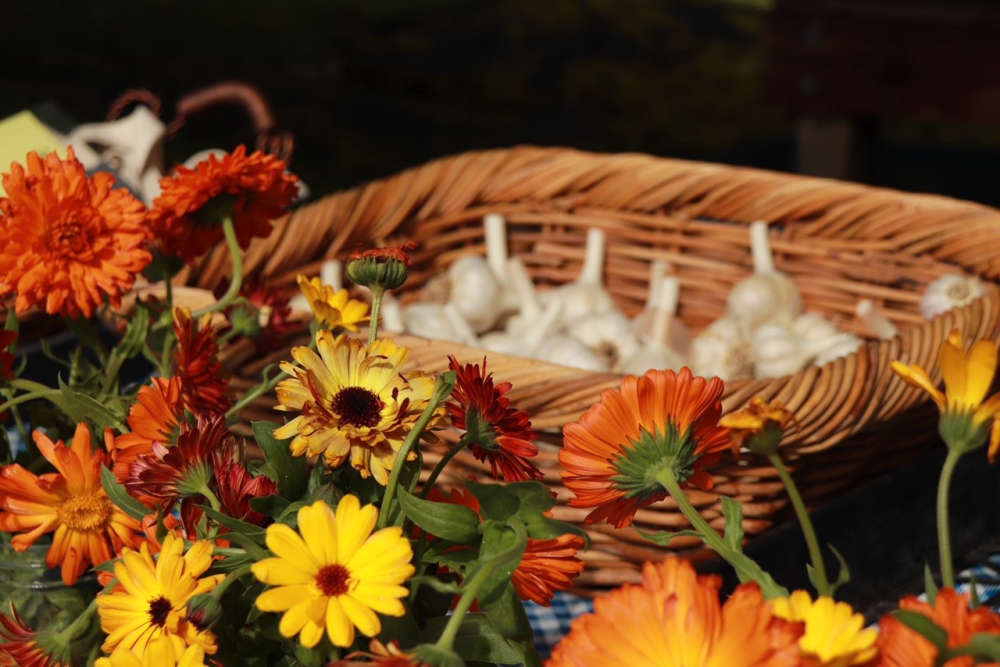 Trousil noted that since the spring was so late, the Harvest Fair was a week later than usual, allowing for potatoes to be included for the first time.

Trousil added what impresses him about the Juneau Community Garden.

“What’s really impressed me about the community garden is that I think everybody that’s been on the board when it was started like 13 years ago. I mean, it’s a very closely knit group, you know that that has a mission, always improving stuff in one way or the other. And I think it’s well run and just great to be able to grow stuff in Juneau.”

Fleming talked about other events the Juneau Community Garden is involved in.

“There’s a plant sale, the Mother’s Day plant sale. Other people participate in that. I think the Juneau Garden Club and Private Growers. And that hasn’t happened in two years either. So we’re part of that. And that’s a fundraiser, we sell plants and we grow plants under lights starting in March to sell. It’s a fundraiser for all, you know, everybody, there’s a lot of people there. It’s the Saturday before Mother’s Day usually. There’s a rhubarb fest, but we didn’t have that this year. We decided against that. That’s not a community event. That is an event for the gardeners to bring a potluck of rhubarb. I think given that it was a potluck, we just kind of erred on the side of safety again this year. Then we have two meetings, but they’re membership meetings. So the community stuff, I’d say the Harvest Fair and the Mother’s Day plant sale.”

The youth winners were as follows. 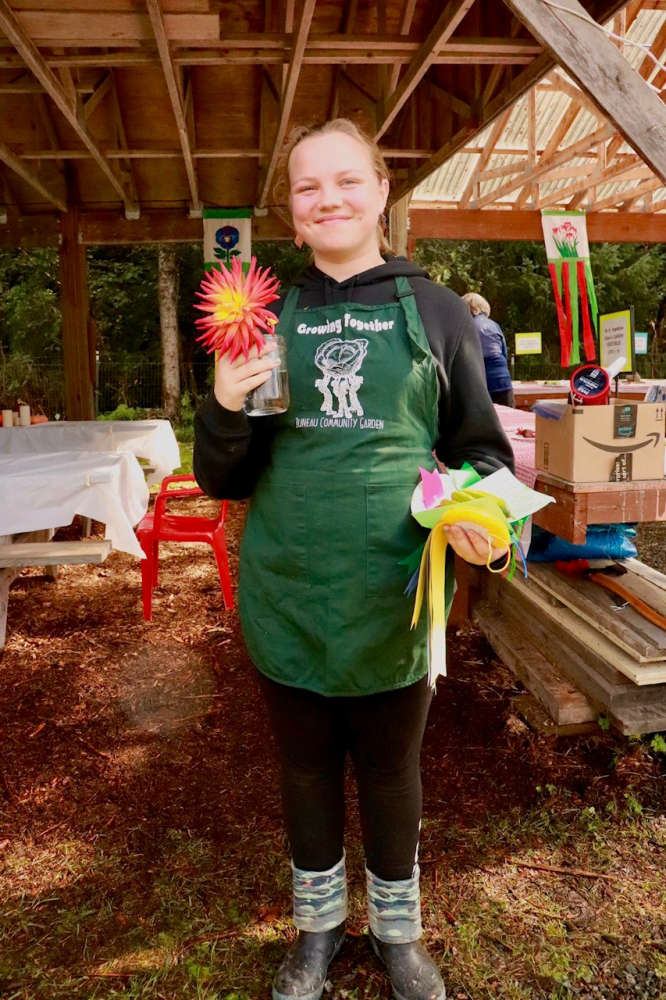 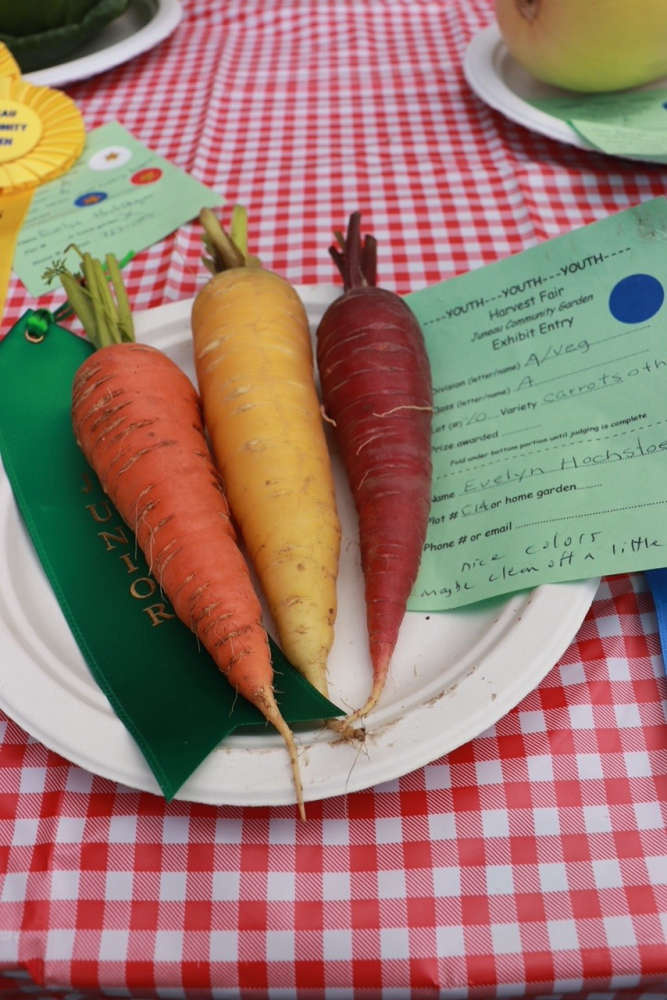 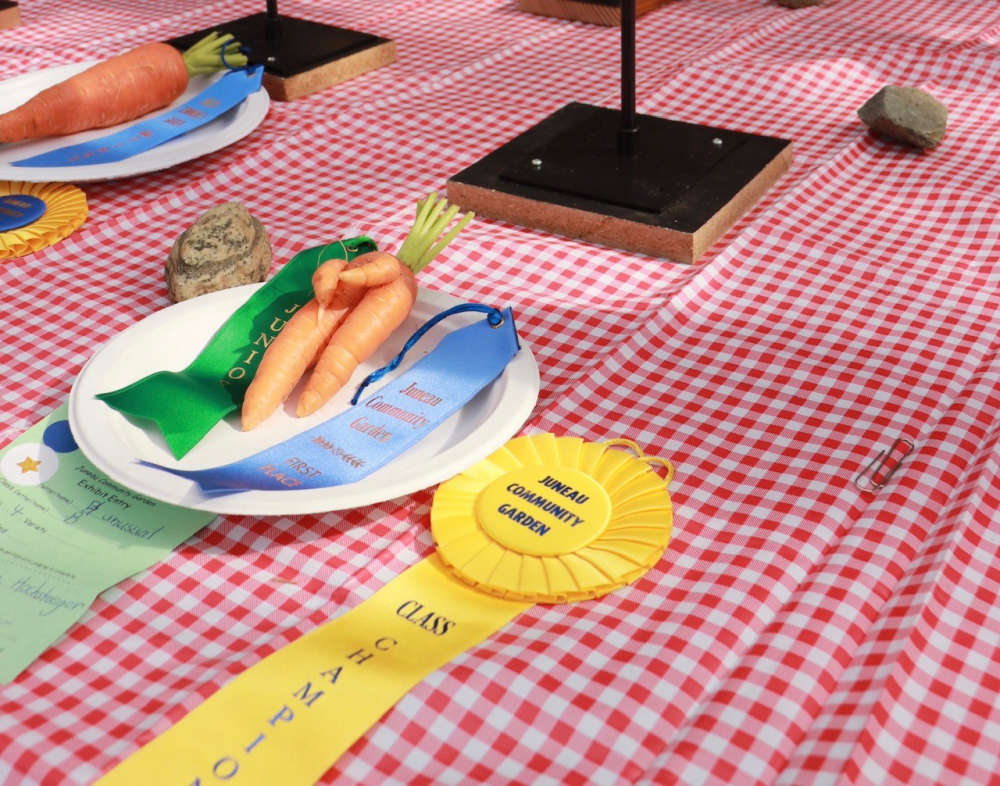 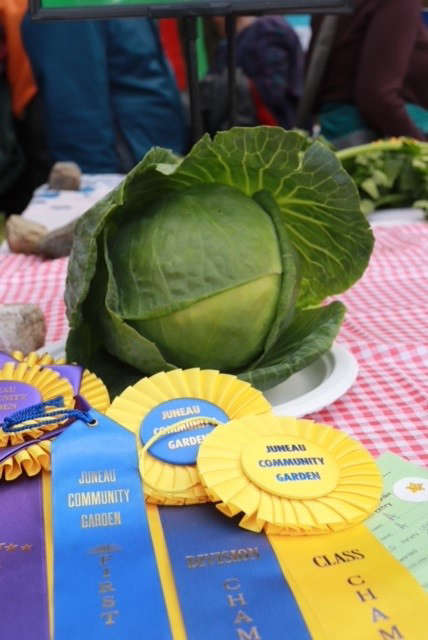 “Harvest Grand fit champion for adults, we have Doug Edgar for his celery. Kim Kiefer won for her largest and unusual pumpkin. Heather Miller has the best of herbs, tarragon. For fruits, we have the best of division Odette Edgar, who won for her raspberries. For the table arrangement, Cynthia won for her flowers. For mixed berries, we have Paul, the best division of prepared foods. Best division E harvest basket, Kim Garnew won for her vegetable harvest basket. This year was the first time we had a scarecrow contest. Torn Bus Family, B3 won for their stylin’ scarecrow. Doreen won for her ready-to-work scarecrow. Kim and Tom, best use of recycled items and googly eyes. Su Walker’s flower child. B29, Ben and Linda’s ‘Mr. Salty’ scarecrow. Pat Harris had the scare slug. Heather Miller, gone fishin’. And Jennifer and Brady Johnson’s scare bear. That’s it for the scarecrows, and that’s it for the grand prizes.” 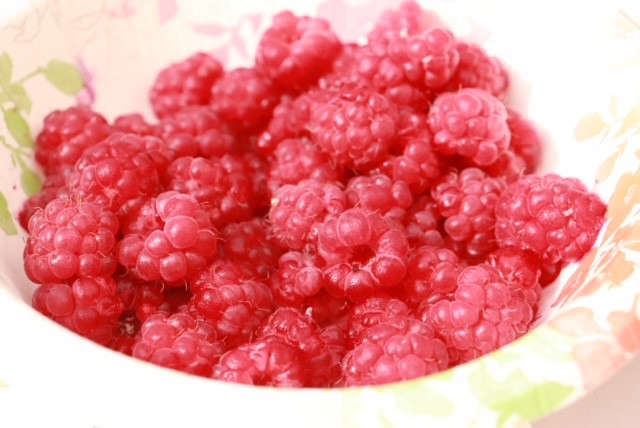 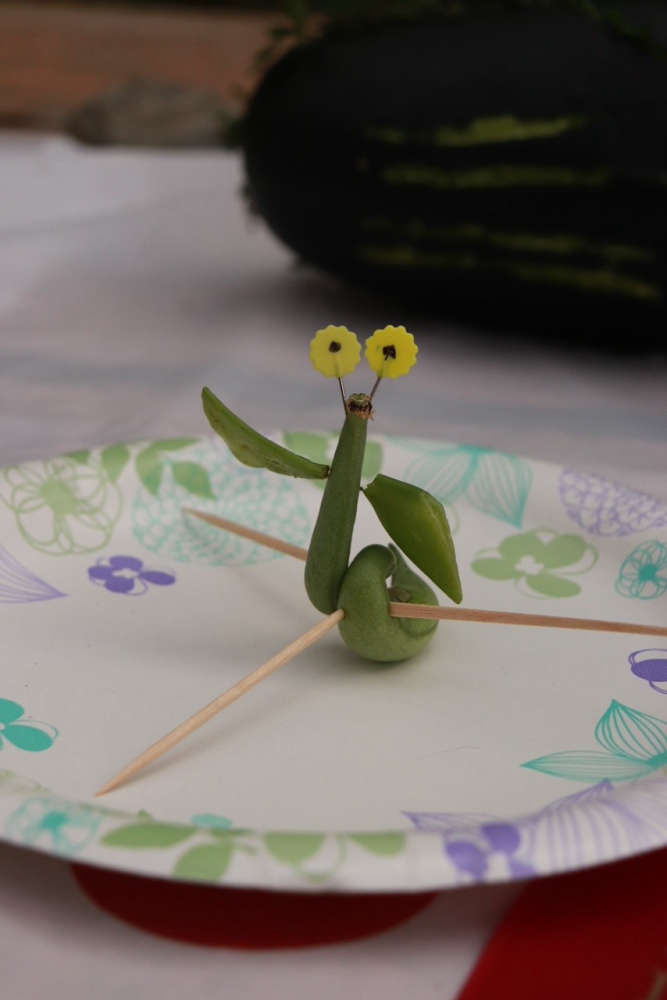 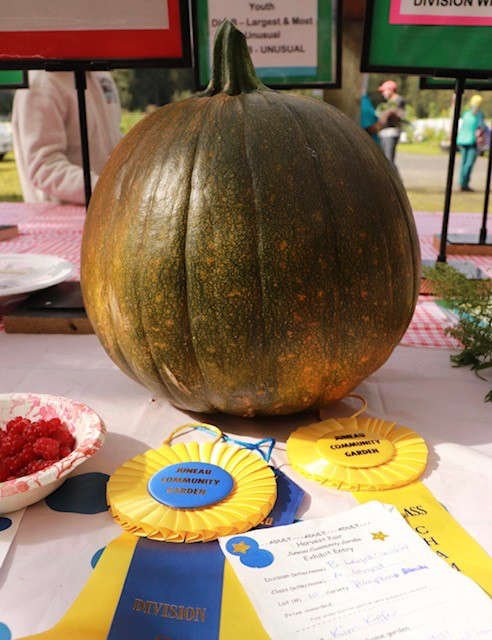 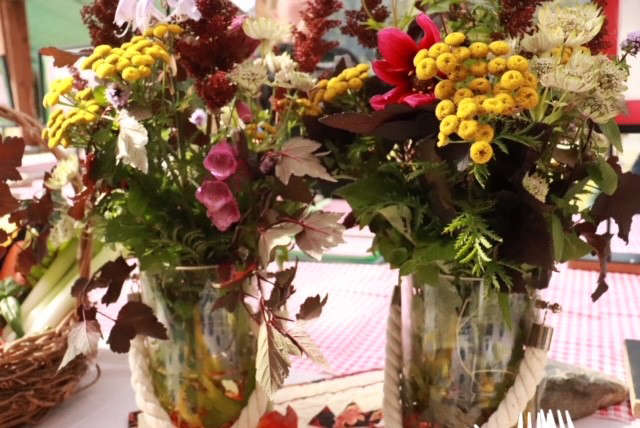